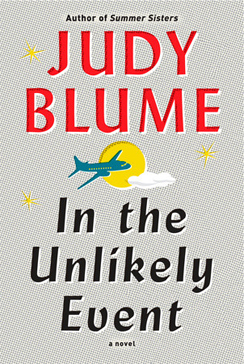 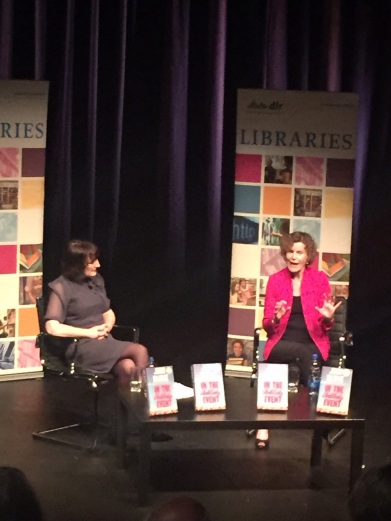 A few weeks ago The Cait Project said ‘Have two tickets for Judy Blume in conversation with Sinead Gleeson on Sunday in the Pavillion and can’t go, anyone interested?’ I typed as fast as my fat fingers could manage and following a quick exchange the tickets were mine.

I arrived at the Pavillion in Dun Laoghaire that Sunday evening all sweaty palms and knotted stomach, my Facebook news feed was filled with photos of Longitude – hotpants, beards and beer, and here I was delirious, thrilled to be in the company of one of my favourite childhood authors. How times have changed.

The inimitable Sinead Gleeson was our stunning helmsman for the night and as a lively Blume settled in she revealed that she had to keep an eye on her husband George who had been caught sleeping in the front row throughout the book tour, she also politely requested water saying she hates to ‘croak’. The ice was well and truly broken. We were hooked.

Blume spoke enthusiastically about George and finding true love and companionship later in life and how that removed some of the angst, at times stifling her creativity.

Referring to her new offering, ‘In An Unlikely Event’, she was asked how an author has a book in her head for over 40 years and doesn’t write it, the book is set in Elizabeth, New Jersey in the 50s and based on true events . A succession of airplanes fell from the sky within a few months of each other. Blume said she always knew the story. ‘but I don’t know where it was – down in my big toe maybe.’

When asked what advice she would give others she said ‘don’t let anyone discourage you and read, read, read’.

She also said that the worst question she was asked in an interview was by a radio presenter in Boston who said ‘So, Judy, who was your first sexual partner? she said, myself, her daughter and her daughter’s friends were in the audience at the time.

We we then had a Q and A and I asked her how she was so happy.

We dutifully queued in order to meet the lady herself. She was of course warm and looked twenty years younger than her 77 years.

She dedicated the book to my sisters and remarked that my sister’s name was the same as the street she grew up on –  ‘Shelley Street’. Then her and George were gone.

Michelle and I sat in a bar at the top of the Pavillion looking out at the harbour, agreeing she was a sort of a sister figure growing up, a revolutionary, in our homes you didn’t discuss your deepest fears, crushes or your periods openly and Blume was our saviour,

The sun set, we sipped our wine and decided it was the perfect night.

Thanks Cait, Sinead and Judy.

The conversation was part of the DLR Libraries’ Voices series, curated by Bert Wright and introduced by Marian Keyes. 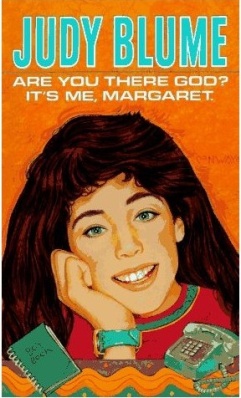 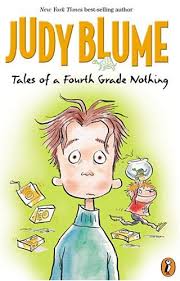 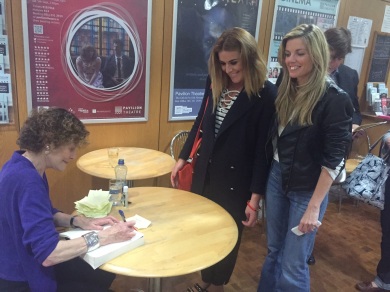 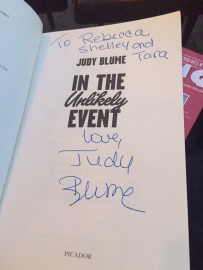